hey this is kunjal.

Another attempt to write.

Not sure if it’s good. But would love to chat with you in the comments.🙂   .

There once lived a princess in a beautiful palace. The palace towered over the entire town and its red domes teared through the sky reflecting light everywhere but on its own. The palace belonged to the ruling family of Mysore that is the Wodiyars. The eleven year old  princess was never happy unlike everyone who visited or stayed in the palace. She was consumed in an undefinable sadness and gloom, but it was not a mystery to be unraveled for many. No one knew she was unhappy. Her father, her mother told, never wished to have a daughter… And she often felt some lingering disappointment whenever she caught him glancing at her.

She remembered the celebrations of Dasara. The whole town had lit up in joy and happiness. Her father ‘s court was highly entertained. There was an act of magic performed by a father and a son. It was very good and entertaining, and she had even clapped for their performance. The son had winked at her and she had giggled. The son’s father had patted his head and with arms around his shoulder proceeded out of the court with gold coins. She remembered her long stare of envy.

Shades of dismay did come with delight. But they were momentary and when they passed, she was left alone with her self-inflicting thoughts.. Wealth didn’t satisfy her, even if it made her feel pleasant for sometime. She wanted to go out and do things. And the idea of not doing them again brought wings of sadness into her.

There was an intruder though who always took space in her thoughts…. For instance, while she was eating her breakfast, deep in thought and took up her cloth to tap her mouth, there it was. A message sprawled on the cloth.

She turned her chair to the curtains which were blowing as the wind was open. Her father raised his brow at her. She started eating, filled with thought.

Again, it happened. While she was in her room, marveling at the thought of the busy markets, while her mother braided her hair, she saw a message on her comb.

It happened many times. And at odd places. She always saw the messages and her sad thoughts disappeared the moment she read them. One time she saw a funny message  which said

‘Don’t wish too much’

She began to suspect that there was an intruder who observed her and became excited at the thought. It somehow felt that those messages kept up fire of hope lit inside herself despite the dreariness of the caged palace.

But once she was too sad. Grief had overpowered her as it never usually did and threatened tears out of her eyes. She had heard her father and mother shouting at each other. And the subject was she, initiated by her father.

The itching was long. The pain was immense. She felt she could never impress upon her parents. Her mother spoke of business, her dress, her jewelry and princes of which she performed with utmost obedience… Now they wanted her married off to a prince, the subject of their discussion being the richer groom! They never had emotions which attached them to her.

And maybe neither did she..

Her feet trudged and slipped to the top of the tower and at last she reached the opening of the endless spiral. 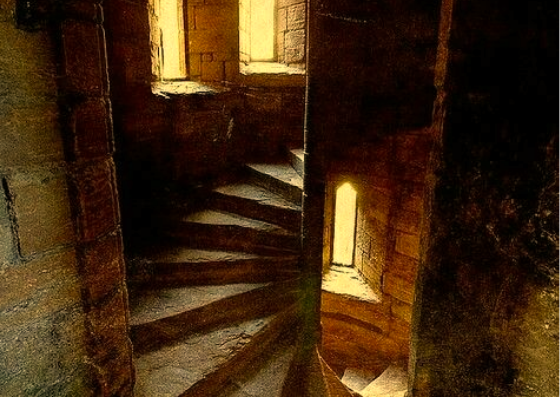 The fresh air greeted her and wrapped around her. She felt its strong hold, and she was too weak to gather power..

And she finally did what no room in the chambers of the palace could provide for. She cried… tears rang in the air. She wished for the intruder to show up again… With another message.. Before she even finished her thought, she saw a message in little hand, on the bottom of her handkerchief. It said

‘But what if I do it?’, she asked herself. Afterall, the messages knew exactly what happened in her mind.

‘But what if I do it?’, she again repeated as she walked forward. Her silken blue gown trudged behind, like water receding from the shore. The little eyes, now dried, peered again at the handkerchief. But she found it completely blank this time. There wasn’t any intruder. There was no wish inside her to see the message again. To correct the wrong thoughts, the wrongdoings,to feel unhappy. Wasn’t it bad to feel weak? Wasn’t what her father always said in his little rhyme to her;

It is strength which keeps you going,

When you feel you can grown no more,

God promised you for growth

For light of the day,

And the dark of the day

The strength is you.

– The little girl ‘s imagination had played with her mind. There was no intruder.. No one who cared to intrude..

And it was completely settled then. She jumped. The silken fabric left the floor.

The stars pound to mark’

The feeble light I remember,

. Let ‘s chat in the comments. Did you like the short story?

Two teenagers who could enthrall you with their deep thoughts,stories,opinions about greater problems that teens are meant to stay away from:) Do take a peek in. and stay if you are ready for a ride..🎢 View more posts

7 thoughts on “‘Running- a short story’”